In July, 1995, this reporter published “The Story of Danny & Maureen Faulkner” in the Police Foundation’s magazine “WANTED! The Nation’s Most Dangerous Criminals.” Officer Faulkner was murdered in front of several eyewitnesses on the morning of December 9, 1981, by Mumia Abu-Jamal. The magazine also featured an excerpt from literature Maureen Faulkner was distributing which urged Americans to “Boycott any movie or TV show featuring the following “Cop Killer” Lovers . . . ”

Download the PDF here for better viewing and printing

One month later, in August, 1995, Ben Cohen, the co-Founder of Ben & Jerry’s Ice Cream, paid for a full-page ad in the New York Times which included the names of numerous celebrities who offered their support for Abu-Jamal. That letter, signed by many activists from the Hollywood entertainment industry, including the actor Alec Baldwin and Director Oliver Stone, inexplicably took the position that Mumia Abu-Jamal was not the murderer of Officer Faulkner, despite incontrovertible evidence entered into evidence during his trial.

Journalist Nancy Ritter published a follow-up story in the November, 1995 issue of Wanted! Magazine. Ritter reported that on September 16, 1995, 5,000 members and supporters of Philadelphia’s law enforcement community gathered to offer support for Maureen Faulkner and denounce those celebrities who had taken up Abu-Jamal’s case. Among those in attendance was Philadelphia Mayor Edward Rendell and Gil Gallegos, the National President of the Fraternal Order of Police.

The National Police Defense Foundation was one of the first law-enforcement organizations to call for a boycott of Ben & Jerry’s Ice Cream. Since the Police Foundation’s action in this matter, law enforcement groups across America have joined in calling on it’s members and supporters to not purchase this commodity.

In September, 2011, “One Million Moms,” a division of the non-profit American Family Association, called on a national boycott of a new flavor of Ben & Jerry’s Ice Cream named after a Saturday Night Live skit featuring Alec Baldwin which the Association found unsuitable for children, a prime consumer group for products such as ice cream. Ben & Jerry’s Ice Cream has also named a flavor “Cherry Garcia” after Grateful Dead musician Jerry Garcia. Memorializing a person whose lifestyle was defined by his abuse of heroin and cocaine is not appropriate for a consumer product that is of appeal to America’s children.

In October, 2014, U. S. Senator Pat Toomey asked Goddard College in Vermont to rescind it’s invitation for Mumia Abu-Jamal to address via videotape the Commencement Ceremony of it’s Graduates that year. To do so, the Senator claimed, would be a “slap in the face to Danny Faulkner’s family, and to all of the law enforcement Officers who risk their lives for us every day!”

It is no surprise to the members of the National Police Defense Foundation that this consumer boycott advocated 21 years ago is relevant today. At the core of the Foundation’s purpose is to honor those members of the law enforcement community who have made the ultimate sacrifice in the line of duty. The Police Foundation does not – and will not – forget those such as Police Officer Danny Faulkner.

Find out about  NPDF membership and how you can Join.

Appreciate our articles, stories, and Legal Defense cases and our Safe Cop Program?

You can donate and help us continue to support Law Enforcement!

THE STORY OF DANNY & MAUREEN FAULKNER 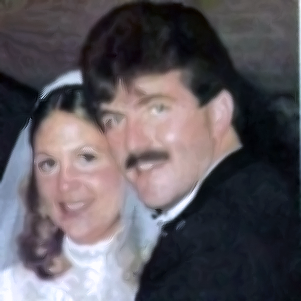 From the July, 1995 issue of Wanted! Magazine

With those words, two Philadelphia police officers told to a 25 year old woman that her husband of one year, Officer Danny Faulkner, had been killed in the line of duty. It was the morning of December 9, 1981, and what marked the end of a courageous police officer marked also the beginning of a thirteen year nightmare in which his widow says she has been repeatedly victimized by her husband’s convicted killer, his supporters on the left, and the judicial system.

After the initial traumatic task of burying her husband came the trial of his murderer, Mumia Abu-Jamal. The government had a good case against him. He had been a leader of the Black Panthers, known for its hatred of police. There were witnesses to the shooting. Officer Faulkner had been shot five times and five bullets were missing from Abu-Jamal’s gun which was found at the scene, as was Abu-Jamal, who had been shot by Officer Faulkner’s gun.

When the bloodied, bullet-ridden shirt Officer Faulkner was wearing was shown to the jury, Faulkner’s widow, Maureen, says Abu-Jamal turned to face her and smiled.

Nor has Abu-Jamal been the only one to taunt Maureen Faulkner. Supporters of Abu-Jamal repeatedly made harassing and threatening phone calls to Maureen’s home in the year after her husband’s murder, escalating to the point where she had to sell her home and go into hiding. This move, and the conviction of Abu-Jamal for murder in the first degree, brought a brief respite of calm into the widow’s life, but this was not long to last.

Events of recent years reopened the emotional wounds inflicted upon the widow Faulkner by her husband’s killer and his supporters. First, there was the trip Faulkner and other supporters of her husband made to the Pennsylvania state capital with the signatures of 10,000 people demanding that then-Governor Casey sign the warrant which would carry out the death sentence given to Abu-Jamal. Outside the Governor’s office, militant supporters of Abu-Jamal surrounded Faulkner and her supporters, including her elderly mother, and began a pushing and shouting match. “I was afraid my mother was going to die!” says Maureen, still distraught over the event. Equally dismaying was the Governor’s refusal to allow Abu-Jamal’s sentence to be carried out.

Then came the announcement that National Public Radio would broadcast “commentaries” of Abu-Jamal live from death row. Maureen and her allies fought back, enlisting the support of congressional leaders such as Senator Bob Dole, who pressured National Public Radio to cancel the broadcasts by threatening the withholding of taxpayer funding.

Then Maureen learned that Abu-Jamal was writing a book, the recently published “Live from Death Row,” and that Hollywood was interested in making a movie about him. Maureen succeeded in getting the Pennsylvania House to pass Special House Bill 18, which diverts royalties earned by criminals to the relatives of their victims.

In a telephone interview from her home in California, Maureen Faulkner related how her husband Danny was devoted to raising funds for charitable organizations, especially those that helped children such as Jerry Lewis’ Multiple Sclerosis Foundation. In memory of her husband, Maureen plans to donate the monies from Abu-Jamal’s book to various organizations. “That’s what Danny would want me to do,” she says in reverence to her husband.

But Faulkner is also waging battle against the publishing house that will generate these funds, Addison-Wesley. “They are a textbook publishing house!” she angrily points out. “There isn’t a school child in Pennsylvania that doesn’t have one of their textbooks! Why is it that a company that generates most of it’s income from books for kids takes a left turn by publishing a book by a convicted cop killer”?

Another angry supporter of Danny Faulkner is his partner, Gary Bell, who because of a manpower shortage was separated from his partner the night of his murder. Bell was among 50 police officers from Pennsylvania, New York and New Jersey who protested at a recent Abu-Jamal fundraiser held at the Atlantic Theatre in New York. Bell and his associates point out that this theatre is funded in part by a grant from the National Endowment for the Arts, which is perhaps best known for funding the homosexual S&M pornography of Robert Mapplethorpe and Andres Serrano’s photograph of a crucifix submerged upside-down in a container of Serrano’s urine.

As a taxpayer, I am outraged this taxpayer supported facility is being used to raise funds for a convicted cop killer!” Bell said. Bell was also angry at the way supporters of Abu-Jamal have portrayed his murdered partner. Bell remembers Danny as the greatest guy in the world. “He defused situations, rather than escalated them!” says Bell. “He was like a brother to me. He was my partner and my best friend. I won’t let them destroy his character and memory!”

Yet for every supporter of Faulkner, like Officer Bell, there is an equally impassioned supporter of Abu-Jamal, among them the radical left, including Hollywood celebrities Whoopi Goldberg, Ed Asner, Mike Farrell, and Susan Sarandon. While critics are quick to point out that Asner received notoriety in the mid-1980s by defending the Communists in Nicaragua and El Salvador, Abu-Jamal does have supporters within the law enforcement community also, most notably Ronald Hampton, the Executive Director of the National Black Police Association. “Police officers lie! Police officers fabricate evidence!” says Hampton, a 23-year veteran of the Washington, D.C. police force. Hampton’s organization, which represents 35,000 men and women nationally and is an opponent of the death penalty, is quick to point to the fact that most inmates on death row are people of color. For this reason, and those relating to the integrity of cops in general and Philadelphia cops in particular, Hampton’s group intends to defend Abu-Jamal until his case – and fate – are finally resolved.

Recently, Pennsylvania Governor Ridge signed a warrant calling for the imposition of Abu-Jamal’s death penalty. As the U. S. Supreme Court has already upheld Abu-Jamal’s conviction, it is likely his execution will eventually take place. Most experts expect this will be in about two year’s time.

This will be none to soon for Officer Faulkner’s widow. Then, and only then, does Maureen Faulkner believe she will be able to have a sense of closure to the nightmare that began for her one morning thirteen years ago when two Philadelphia police officers knocked at her door.

Find out about  NPDF membership and how you can Join.

Appreciate our articles, stories, and Legal Defense cases and our Safe Cop Program?

You can donate and help us continue to support Law Enforcement!