For most Americans, the Holiday Season that begins with Thanksgiving and culminates on New Year’s Eve is a time of celebration, reflection, and remembrance.  Many thousands of Americans, in the Counting of their Blessings this year, will give Thanks to having had a Public Servant who made a positive impact on their lives and livelihoods.  That person is former Congressman Guy Molinari, who departed this life on July 25 at the age of 89. 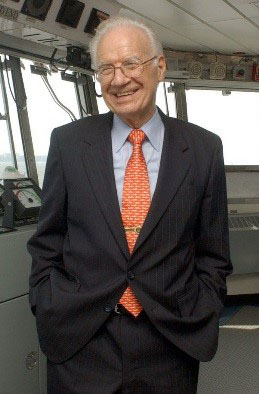 If there is one word that comes to mind by those who had the privilege of having known Guy Molinari, that word is “Courage.”  Courage is what Molinari exhibited when he joined the Marine Corps as a young man.  At a celebratory stop at a bar in, ironically, Washington, D. C., en route to Basic Training at Camp Lejeune, North Carolina, Molinari  led his fellow recruits to walk out of that bar in protest of a racist bartender who refused to serve one of the young men in Molinari’s group who was African-American.  Once in the Corps, Molinari, armed with a Law Degree, stood up to superior Officers Indifferent or Hostile towards Justice.  In the frozen fields of South Korea Molinari thus established a personal template that would guide him through the rest of his extraordinary life; he would be a champion of those falsely accused of wrongdoing.

Molinari returned from the Korean War to his beloved Staten Island in 1953.  It was there he turned to the practice of real estate law.  The rule of law was a principle by which Molinari was raised; his Grand-parents had immigrated to the U. S. from Italy – legally and honorably, in 1899, seeking a new life in a new country in a new Century.

On September 1, 1956 Molinari married the love of his life, Marguerite Wing.  In 1958, the Molinari’s welcomed a baby girl into the family, Susan.  The three embarked on a typical, Middle-Class American life, interrupted by Tragedy.  In November, 1968 an out-of-control auto collided head-on with a car in which Molinari and 3 buddies were driving.  Friend Sven Knibestol was killed.  While undergoing emergency surgery in a hospital, Molinari’s heart stopped beating.  Persistent doctors brought him back to life.  Molinari then faced one of his toughest challenges; saving his crushed leg.  Over many painful months, the leg was saved, and the young man had to learn how to walk all over again.  Guy made a promise to himself that he would one day once again play racquetball, once again go jogging.  Guy Molinari always kept his promises.

Once Borough President of Staten Island, Molinari had a car that was totaled in a crash put on display in a public park, along with a warning as to the dangers of driving under the influence.  When Molinari married Marguerite, it was their intention to raise a large family.  Medical issues limited the young couple to just one child.  Instead, as Congressman and later Borough President, Guy Molinari considered his Constituents as his extended family.

In 1980, the Democratic Congressman from Staten Island John Murphy faced Indictment over the ABSCAM scandal.  The local Republicans thus saw an opportunity to re-claim that seat, but knew their choice had to be someone beyond reproach.  Guy Molinari was chosen, who ran promising to restore Integrity to that office.

As a Congressman Molinari was renown for his anti-Communist stance, joining the Reagan Administration’s fight against Communist insurgents in Central and South America.  In 1986, Molinari was among 9 Congressmen who embarked on a fact-finding trip to Nicaragua and El Salvador, ahead of an upcoming vote for funding for the anti-Communist “Contras.”

If such activity qualified Molinari to be labeled a “right-wing Conservative,”  Guy belied that label as a strong Environmentalist.  As Congressman, and later Borough President, Molinari fought those corporations, utilities, and Mafia-controlled companies that were poisoning the environment of Staten Island.  This included taking on the powerful Mob-dominated waste-management industry that for decades operated America’s largest open-air – and illegal – landfill, Fresh Kills on Staten Island.  This fight put Molinari at odds against the Administrations of New York City Mayors Ed Koch and David Dinkins.  Recognizing that Staten Island could only be saved by the election of a Republican as Mayor, Molinari’s support of former Prosecutor Rudolph Giuliani was crucial in securing Giuliani’s election as Mayor in 1993.  Today, what was once America’s largest open-air, illegal garbage dump is now New York City’s largest public park and wildlife refuge.  Guy Molinari always kept his promises.

In 1988 Molinari was re-elected with over 60% of the vote.  However, with the beginning of the collapse of Communism worldwide the following year, Molinari decided to resign from the Congress on New Year’s Eve, 1989.  He would be succeeded in a Special Election in the new decade by his hand-picked successor, his daughter Susan, who would easily win that election.  Susan later married Bill Paxton, a Congressman from Upstate New York, and the two of them became a “Power Couple” in Washington.  Susan Molinari was the keynote speaker at the Republican National Convention in 1996, a rising, Moderate star in the Republican Party.  However, a year later, Susan Molinari left Congress.  Among the reasons were Susan Molinari’s focus on the Education, safety, and security needs of her children.

As Borough President,  Guy Molinari focused his attention on 2 scourges afflicting his constituents on Staten Island; the crimes committed against their environment regarding the landfill at Fresh Kills, and the growing trafficking of drugs.  During the 1980s, the crack cocaine epidemic exploded across America.  Drugs were invading Staten Island and bringing violence with it.  In February, 1989 a crime was committed on Staten Island that stunned the nation.  An Agent of the Drug Enforcement Administration, Everett Hatcher, was brutally murdered by Gus Farace, a low-level Bonnano Mafia Family member.

In 1991, Molinari was contacted by a Constituent whose brother, Joe Occhipinti, the most decorated Agent in the History of the Department of Immigration and Naturalization Service, was convicted for allegedly violating the civil rights of New York bodega owners during Consensual Searches targeted for drug trafficking and other criminal acts.

Once contacted, Occhipinti put Molinari in contact with Manuel de Dios, the Editor of the largest Spanish-language newspaper in America, El Diario.  In a telephone conference, de Dios confirmed to Molinari that Occhipinti had been framed by the Colombian/Dominican drug cartel.  De Dios also expressed his concerns that his life was in danger for speaking out against the drug cartel.  On March 11, 1992, de Dios was executed in a Queens, New York restaurant by Wilson Alejandro Mejia-Velez, an illegal alien drug dealer, acting on the orders of Colombian drug lord Jose Santacruz Londono.

Molinari would later be contacted by Alma Camerana, who was a Police Officer in her native Puerto Rico before she moved to New York City.  She was then recruited as an FBI Informant by FBI Agents in Queens, with her mission to approach Molinari, wearing a wire,  and convince him to offer her a job in exchange for information she had on the Occhipinti case.  Instead, Alma Camerana became one of the few FBI Whistleblowers, which have included Fred Whitehurst, Donald Rochan, and Colleen Rowley.  What Camarena did was report the attempted set-up to Guy Molinari.  A furious Molinari then took this story to the Media, and in April, 1995 the New York Post ran the story: “Guy Molinari Fumes: FBI Tried to Set Me Up!” “It’s outrageous!” Molinari said. “If they will do this to me, an elected official, I hate to think what they might do to a member of the general public!”  The Justice Department did admit that such an operation did take place, but also claimed that Department lawyers rejected the plan.

In June of 1992, Guy Molinari resigned in protest from President Bush’s Re-election Committee after the President refused to grant a Presidential Pardon to Occhipinti.  Instead, President Bush later Commuted Occhipinti’s sentence, sending him home from Solitary Confinement in a Maximum Security Prison.  Subsequently, one of the Bodega owners who testified before the Federal Grand Jury that Indicted Occhipinti admitted to the news program Inside Edition that he committed Perjury before that Grand Jury.  No charges were filed against him, nor was the Occhipinti case re-opened.

Once home, Joe Occhipinti and his wife Angela established the non-profit National Police Defense Foundation to offer legal and moral support to those in the law enforcement community who also were falsely accused of crimes.

One of the first cases embraced by the Police Foundation as well as Guy Molinari was that of the “Feerick Four,”

NYPD Officers led by Lt. Patricia Feerick who were convicted of an alleged illegal search of a Harlem apartment in search of a Police radio stolen by drug dealers.  The key Prosecution Witness in that trial was Ben Stokes, a “Lieutenant” in a drug gang, the “Purple Caps,” so named for the color of the vials of crack cocaine they sold to young people in their Harlem neighborhood.  The Purple Caps drug gang had been responsible for the murders of at least 7 people.  Stokes had been caught with 591 vials of crack cocaine, but the Manhattan D. A.’s Office decided to overlook that in exchange for Stokes’ agreeing to testify against the “Feerick Four.”  Stokes did just that, but continued to sell crack; a videotape would later be obtained by the Media which showed Stokes selling cocaine to a woman pushing a baby in a stroller.  Jurors in the Feerick Four trial did not see that videotape.  Lt. Feerick and her 3 co-defendants were convicted of the charges against them.  Feerick was sentenced to 2 years in prison, although then-Governor George Pataki would commute her sentence after receiving over 20,000 Petitions from crime-wary New Yorkers, many of them Harlem residents, demanding her release.

In 2016, Guy Molinari published his auto-biography, “A Life of Service,” co-authored by Patricia Feerick.

Guy Molinari’s response to the Injustices in the Occhipinti and Feerick cases was typical; rather than using just words to condemn such outrages, Molinari decided to take action.  In 1995, Molinari surprised many of his Constituents by announcing his candidacy for District Attorney of Staten Island. Molinari had been growing increasingly frustrated over the emerging scandals of drug dealers operating on Staten Island with seeming impunity.  He was also still angry at the attempt by FBI Agents to set him up a few years earlier.  Molinari knew that given the Subpoena power accorded a Prosecutor, he could bring before a Grand Jury drug dealers and their corrupt co-horts in law enforcement who protected them.  In the only political race he would ever lose, Staten Island voters chose to retain as Borough President the man who had so courageously stood up for them, as well as beleaguered members of the law enforcement community.

Guy Molinari spent his retirement years watching his Grand-children grow up.  He remained loyal to the people of Staten Island, as well as America’s law enforcement community.  At a time when some politicians dare to advocate the abolition of I. C. E., the example set by Molinari is all the more powerful.

*
J.R. de Szigethy is a Manhattan-based crime reporter who can be reached at: e-writer10065@nyc.rr.com