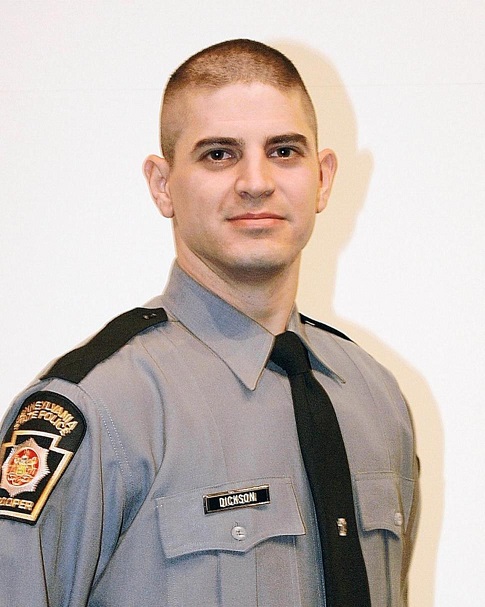 The NPDF mourns the tragic loss of Pennsylvania State Police Cpl. Bryron Dickson and serious injuries sustained by his partner in an intentional ambush at the Blooming Grove Police Barracks on September 12, 2014.

The NPDF is concerned about the recent increase in armed assaults  and intentional ambushes upon our police nationwide which is becoming common practice by criminals. The NPDF hopes that the posting of a $10,000 Safe  Cop reward will help bring to justice these cowards  who saw fit to kill and seriously injure two dedicated Pennsylvania Troopers.

Executive Director Joseph Occhipinti announced the posting of the $10,000 Safe Cop Reward in connection with the ambush shooting of two Pennsylvania State Troopers during a shift change at the Blooming Grove Police Barracks (Pike County) on September 12, 2014 by unknown assailants.

As a result of this armed assault and calculated ambush, one State Trooper identified as Corporal Byron Dickson was killed and the second Trooper, Alex Douglas underwent surgery and is in stable condition.

The posting of the $10,000 Safe Cop reward was predicated upon a formal request from Pennsylvania State Police Commissioner Frank Noonan on September 15, 2014.

The Safe Cop program is a congressionally recognized law enforcement initiative of the National Police Defense Foundation (NPDF) that posts up a $10,000 cash reward for public information leading to the arrest and conviction of any person who shoots at a law enforcement officer, anywhere in the United States.

Any person having information relative to this police shooting is requested to contact the Pennsylvania State Police at 866-326-7256, local FBI office or National Police Defense Foundation at 888-SAFE COP.

END_OF_DOCUMENT_TOKEN_TO_BE_REPLACED

The National Police Defense Foundation has issued a $10,000 reward for information leading to the arrest and conviction of suspects... END_OF_DOCUMENT_TOKEN_TO_BE_REPLACED

The NPDF mourns the tragic loss of Pennsylvania State Police Cpl. Bryron Dickson and serious injuries sustained by his partner in... END_OF_DOCUMENT_TOKEN_TO_BE_REPLACED

The murderer of Tampa Police Officers’ Jeffrey Kocab and David Curtis was found guilty and will be sentence next month. ... END_OF_DOCUMENT_TOKEN_TO_BE_REPLACED