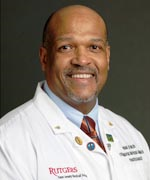 The National Police Defense Foundation is honored to recognize Dr. Dorian Wilson with the “Distinguished Member Award” in recognition of his long-term membership and financial support to many of our law enforcement and child safety initiatives such as the “Operation Kids” and “Safe Cop” programs.

His faculty appointment at New Jersey Medical School was punctuated by service in the U.S. Air Force (commissioned Major), where he received the meritorious service medal.