Baby Scarling has been legally blind since birth and has been scheduled to undergo eye surgery that can potentially restore her eyesight at New York Eye & Ear Infirmary on September 18, 2013. The complex surgery will be performed by nationally renowned eye surgeon, Dr. Brian Campolattaro at the New York Eye and Ear Infirmary.  A visa appointment has been scheduled for Baby Scarling and her mother at the American Consulate in Santo Domingo on September 11, 2013.

The Executive Director said, “Despite the security concerns of September 11th and heightened security at consulates  worldwide, he will personally travel to the Dominican Republic and present Baby Scarling to consular officials in hopes they approve the visas. I simply hope that the surgery can restore her eyesight that will result in one positive thing that occurred on the anniversary of September 11th.” The Operation Kids program, a congressionally recognized  child safety initiative of the National Police Defense Foundation, is credited for arranging numerous lifesaving operations for critically and severely handicapped ill children worldwide. The program demonstrates law enforcements commitment to protect our children from criminal elements and life threatening illnesses.

The NPDF agreed to secure the necessary visas and fund the entire cost of travel, lodging and related expenses. NPDF Executive Director will be returning to Newark International Airport with Baby Scarling and her mother on Friday, September 13, 2013 on United Flight UA1473. They will be met by various law enforcement officials including the New Jersey State Police, Port Authority Police of New York and New Jersey, and the Newark Police Department who will provide a
courtesy VIP escort to the Ronald McDonald House in New York City

Update 9/18/2013 – The NPDF is pleased to announce that baby Scarling’s surgery was a huge success and she is now able to see out of her left eye.  Next Wednesday Dr. Campolattaro will operate on her right eye with the hope that her eye sight will be fully restored.

Update 9/27/2013 – Baby Scarling’s second surgery was a huge success and she can now see out of both eyes. She will be getting her first pair of eye glasses to take home to the Dominican Republic.

The NPDF needs your help to carry out these humanitarian missions.  We have created a medical fund for Scarling Cabrera. Tax deductible donations can be made by clicking on the link below. Your deductible donation will help fund the cost of air transportation, lodging, and medical related expenses for Scarling while in the US and once she returns home to the Dominican Republic. 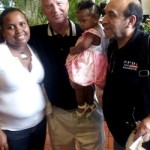 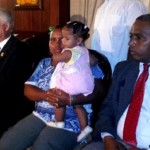 Baby Scarling and her mother

Baby Scarling has been legally blind since birth and has been scheduled to undergo eye surgery that can potentially restore her eyesight... END_OF_DOCUMENT_TOKEN_TO_BE_REPLACED