The National Police Defense Foundation (NPDF) mourns the loss of its Delegate, Robert Abraham who was the former Chief of Police for the Sea Gate Police Department. He also retired as an Inspector for the New York City Police Department, Transit Bureau.

Chief Abraham courageously battled the Corona Virus and passed away earlier this morning at a New York City Hospital.

The Chief faithfully served the people of New York City and has been a delegate to the National Police Defense Foundation since its inception in 1995.

Chief Abraham devoted his career to law enforcement, served on numerous police organizations’ executive boards and was truly a humanitarian. A few months ago, he volunteered his services to help deliver a motorized wheel chair to a paraplegic police officer in Ecuador.

The Chief is survived by his wife, Maggie, five children, Scott, Kenneth, Wendy, Michelle and Eleanor and five grandchildren.

Let’s take a moment of silence and say a special prayer for the Chief and give the family the strength to endure their loss. 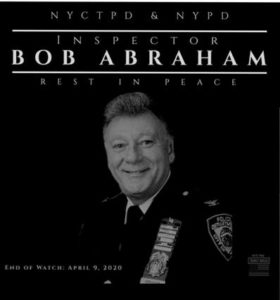 Born on the Lower East Side on September 26, 1941, Bob proudly dedicated his life to civil service. After serving in the United States Marine Corps, he was appointed to the New York City Police Department on May 3rd, 1965. He quickly became a leading figure in the NYPD and a friend to anyone in need.